Destin beaches are world reknowned for their sugar white sands, emerald waters, & blue skies. Destin is the best place to stay & play. You can enjoy some of the best water sports along the Emerald Coast. From pontoon boat rentals to jet ski rentals, to scuba diving, or even just walking on the beach at sunset – Destin beaches has something for everyone.

Consistently ranked as one of the best beach vacations in the U.S., having your vacation in Destin, FL will make your entire family happy. Here’s what the editors of Lonely Planet had to say:

“Florida’s Emerald Coast – Formerly dubbed the ‘Redneck Riviera’, this 100-mile stretch of sugar-fine sand and beachfront towns on Florida’s once-forgotten northern Gulf coast has gone fancy. Even celebs such as Sandra Bullock and Tony Romo frequent the shorelines now referred to as the Emerald Coast, and the rich and famous are hoping nobody else gets wind of their affordable but increasingly classy slice of oceanfront Old South. But in recent years investors have sniffed out the salty Shangri La and its delicious oysters; new condos and hotels, including the area’s first five-star property, Henderson Beach Resort, are shooting up along the coast, and the town of Seaside – or ‘Seahaven’, as seen in The Truman Show– is an eco-friendly, 80-acre dream now studied in architecture schools.”

Why Vacation In Destin

Vacationers in the South and Midwestern U.S. flock to Destin in the summer. The population grows to over 40,000 in the summer. The draw of cool, soft white sandy beaches, and warm Gulf Coast of Mexico water is Destin’s trademark.

While the beaches are the biggest reason vacationers from all over the world visit Destin, is i not the only way people spend their vacations. Destin offers world class golfing, dining, & shopping.

Once a sleepy little town labeled the “World’s Luckiest Fishing Village”, Destin has become one of the world’s top ranked vacation spots. Here is some additional information from Wikipedia about Destin:

Located on Florida’s Emerald Coast, Destin is known for its white beaches and emerald green waters. Originating as a small fishing village, it is now a popular tourist destination. According to the Florida Department of Environmental Protection, over 80 percent of the Emerald Coast’s 4.5 million visitors each year visit Destin.[3] The city styles itself “The World’s Luckiest Fishing Village”,[4][5] and claims to have the largest fishing vessel fleet in the state of Florida.[6]

The city is located on a peninsula separating the Gulf of Mexico from Choctawhatchee Bay. The peninsula was originally a barrier island. Hurricanes and sea level changes gradually connected it to the mainland. In the 1940s, it technically became an island again with the completion of the Choctawhatchee-West Bay Canal. 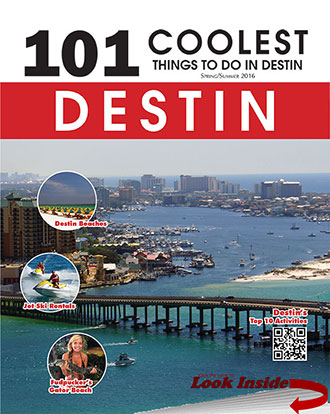